Login
How, what, why?
Where to buy

How does a heat pump work

Heat pumps do not create heat; they simply move available heat from one place to another. An outdoor unit absorbs warmth from the surrounding air and transfers it into your home. As outside temperatures drop, your heat pump must work harder to transfer the same amount of heat. As New Zealand’s best performing heat pumps in the cold, we guarantee superior heating down to -15ºC. All the while, heat pumps are the most efficient form of heating available. 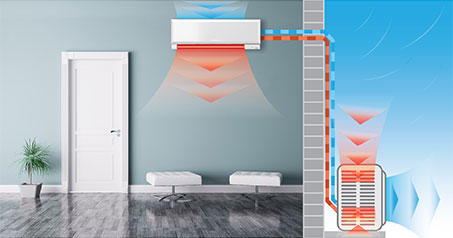 In cooling mode the indoor units heat exchanger is used to absorb heat energy from the indoor room air using refrigerant as the heat transfer medium cooling the room air.
The refrigerant is then sucked back to the outdoor unit through copper pipes and the heat energy is rejected into the surrounding air outside via the outdoor units heat exchanger. 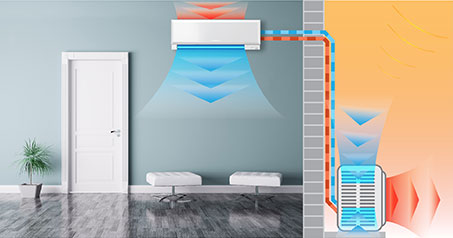 There are two key parts to a heat pump system

There is an outside unit housing the compressor that is similar to the exterior back of your fridge. It draws heat energy from the outside air in even the coldest of weather. That heat energy is then transferred inside the home using a refrigerant process through a piping system powered by an indoor fan unit that is typically mounted to the wall. In summer, the reverse happens - heat energy is drawn from the interior room and expelled by the outside unit. While the system is often referred to as a heat pump rather than air conditioning – both are in fact the same. 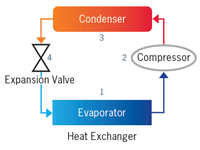 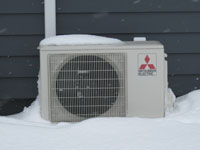 All Mitsubishi Electric Heat Pumps are fitted with intelligent defrost technology to ensure that you get the best performance out of your heat pump when it gets cold.

In low temperatures, all heat pumps have to perform a “defrost cycle” to remove ice build-up on the outdoor coils. This can mean that the heat pump will temporarily stop operating for several minutes or may produce slightly cooler air.

Mitsubishi Electric has developed an advanced version of this, using Fuzzy Logic to learn, measure and record temperatures and running times. This data is then used to ensure defrost cycles are as fast, efficient and far apart as possible – so you can get heat quicker.

When a heat pump is defrosting it is not providing heat to the controlled space. Mitsubishi Electric run the compressor (inverter drive) at maximum speed during defrost to bring the outdoor coil up to temperature as quickly as possible. This melts any ice formed on the coil fins quickly and minimises defrost time. Minimising defrost time maximises heat output per hour real time.

Time between defrost cycles is continually being reviewed and optimized by the Mitsubishi Electric Heat Pump microprocessor software. Algorithmic calculations based on previous history is used to calculate the next defrost period.

Fuzzy Logic (or learning logic) is a form of artificial intelligence. Defrost cycle determination is based on a combination of time and temperature. These parameters are also used to calculate the next defrost period..

What is the difference between a fixed and inverter system?

Slowly gets to temperature as output rating is fixed. Then turns on and off to maintain room temperature.

A fixed speed system only has a single speed compressor motor that is either on or off. It works similar to a single speed fan heater running at its only speed that switches off when the desired temperature is reached and switches on again when the temperature drops to a set level. As there is only one speed that the fixed speed system can run at, it takes a lot longer to get to the desired temperature. As such this tends to lead to a lot more power usage in comparison to inverter driven systems.

Inverter technology uses a variable speed compressor motor similar to a car. It simply slows down and speeds up as needed to hold a selected comfort setting. This means the desired room temperature will be reached more quickly and maintained more efficiently.

The speed control of the outdoor unit also means quieter operation, this is important especially at night in residential areas.

Choose the right one

Use our heat pump sizing tool to point you in the right direction.

Talk to a local heat pump expert about the best solution for you.